My Birthday, Yet Again

Several times a year, I must undergo tests to see if my cancer has returned. Despite all the previous ones coming back negative and my doctor telling me I’m “golden,” I still live with the fear it’ll come back. Normally I’m fine between these diagnostic probes of my mortality but, when the appointed time arrives, I get edgy. Understandable I guess, but no fun.

I had hoped to get the results before my birthday but, due to a scheduling problem, my consult with the doctor was delayed until two days afterwards. That annoyed me because I wanted to have that off my plate by before I celebrated the anniversary of my birth. Waiting on the results is always a dangerous time for me. As my wife will attest, as the appointed hour approaches, I get cranky. So, when we met with friends for my birthday dinner at the Capitol Grille, I was a little distracted. Don’t get me wrong, I had a lovely time, but the uncertainty put a slight damper on the festivities – which probably explained why I downed two martinis instead of my usual one.

On Monday, however, now officially in the last year of my “early fifties” I feel into a terrific funk. Having faced the specter of dying early, I didn’t think it was about getting older, so I chalked my foul mood up to anxiety over my impending doctor’s visit. Having other life problems pressing in on me didn’t help either. So, as I sat in my living room staring at the television while a spring storm raged outside, I found myself wishing I was a better person. That I was tougher and more courageous. That I didn’t let fear and uncertainty impact me or my family so much.

“Daddy,” my daughter cried as came home from a play date. “Come outside.”

“What is it?” I said, dully staring at boob tube.

Grunting, I got off the couch and went outside to see what Natalie blabbing about. The source of her excitement? A glorious double rainbow arching brilliantly across the sky. 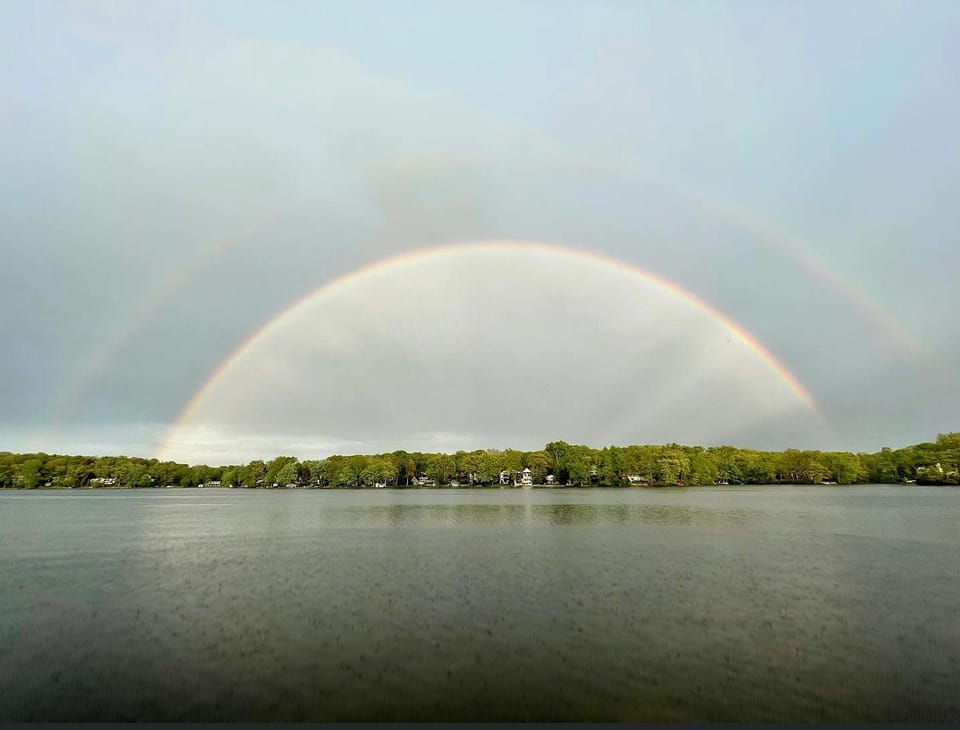 “It’s beautiful,” I said. “Thank you for showing it to me. I would’ve missed it.”

Standing in the driveway, I remembered my last birthday. Facing major surgery, I was cranky back then too. But then a series of beautiful moments came out of nowhere, lifting my spirits and giving me the perspective and strength to endure.  As that rainbow dissipated my dark mood, I remembered, and not for the first time, that “beauty is gloriously useless.” Having no purpose other than itself, we delight in it for “the sake of delight alone.” When you think about it, that means beauty needs nothing in order to beautiful. It doesn’t depend on how we’re feeling, whatever situation we find ourselves in, and can manifest itself even in the worst of circumstances. It just Is.

A wise man once wrote, “There is an unsettling prodigality about the beautiful, something wanton about the way it lavishes itself upon even the most atrocious of settings…a village ravaged by pestilence may lie in the shadow of a magnificent mountain’s ridge….Cambodian killing fields were often lushly flowered; Nazi commandants occasionally fell asleep to the strains of Bach, performed by ensembles of Jewish inmates; and no doubt the death camps were routinely suffused by the delicate hues of a twilit sky. Beauty seems to promise a reconciliation beyond the contradictions of the moment, one that perhaps places time’s tragedies within a broader perspective of harmony and meaning, a balance between light and darkness; beauty appears to absolve being of its violences.”

Throughout my life, beauty has “lavished” itself upon me during my worst moments. Whether I was a child crying in the forest, seeing my friend die on a glorious spring day, or wondering if cancer was going to punch my ticket, it has always appeared. Granted, I haven’t always noticed those moments, even thinking it mocked my suffering at times, but Beauty’s response was just to sail calmly on. And, as it peacefully flows through time and creation – needing nothing and wanting nothing – I think it is unaffected by the most atrocious of circumstance because, for beauty, things like sickness, evil, sin and death simply do not exist. It blows past them like they’re not even there.

Of course, as we struggle in this vale of tears, we’re mightily affected by life’s awfulness. So, when we witness beautiful moments during our many travails – like 9/11 happening on a perfect summer morning – it can be jarring. I think that’s because the juxtaposition reminds us how estranged we are from Original Beauty, the world as it ought to be.  Consciously or unconsciously, I think we all desire for that world to come again – innocent, peaceful, and free from pain. But, if in your despair and grief, you’ve failed to notice some of those beautiful moments swirling around us, you needn’t worry – they will always come again. That’s because Beauty’s “wanton prodigality,” far from being sterile, indifferent, or cruel, is merciful beyond measure. Patient, inexhaustible and infinite, it will never run out of giving us wonderful things to experience. It tells us we’ll always have something to look forward to, that there’ll always be more fun around the corner. That gives us the hope to ‘bear all things, believe all things, hope all things, and endure all things.”  Perhaps that’s how beauty absolves being of all its violences. Maybe.

The next morning the doctor strode into the exam room to give me the results. After telling me I was a “perfect surgical outcome” and cancer free after almost a year he said, “You’re very, very lucky. Do you realize that?”

“Happy Birthday by the way.”

Of course, after reading all the sobering statistics since my diagnosis, I was acutely aware this conversation could’ve gone an entirely different way. And one day, it just might. Cancer is one of life’s violences and there are no guarantees. Driving home, however, I thought about that rainbow my daughter dragged me out to see. In the Bible, a rainbow is the symbol of God’s promise not to destroy his good creation; an assurance that, no matter how long, short, or uncertain my life might be, nothing is ever truly lost. That the party will never end.

Smiling, I realized that, through a chance confluence of light and rain, Beauty had come to my rescue yet again.