I was surfing the internet when I found a trailer for the upcoming Superman movie, Man of Steel. When I was done watching it I realized I had tears in my eyes.

As I get older, I find myself choking up more at things – just like my father. But it didn’t take much to figure out why my emotions were stirred. Yeah, I’ve always had a soft spot for The Supe, but it wasn’t just the thought of a guy in a cape generating sonic thunderclaps as he soared though the clouds – though that was wicked cool. No, it was something older, sacred and powerfully wrapped up in the DNA of world culture – the idea of a champion. The superman. The One.

The Song of the Hero.

The literatures of the world abound with tales of strong men tested to the limit but whose virtue remains unbroken. Religion is filled with prophesied figures that defeat death; free the oppressed and spread hope to the living. It’s an ancient archetype that Joseph Campbell explained better than I ever will.

Whether we admit it or not, we all yearn for a protector. We’re always on the lookout for a savior. The Hero is one of our oldest myths and it resonates throughout the human experience. And like all myths it developed from peoples’ need to assuage their greatest anxieties on a communal level. Stories have always been how we cope with our deepest fears and express our greatest hopes. We yearn for someone who is incorruptible, who can boldly go where we fear to tread.

Yet as we get older we realize we are weak and corruptible. We stumble and fall. Religions burn us, politicians lie to us, love withers and we become too jaded for our own good. We stop believing in people who are good for goodness’ sake. All motives are mixed and somebody’s always on the take. An overgrown Boy Scout running around in a costume looks ridiculous and naïve. That’s for children. That’s not how the world works.

But as I watched that clip, I was reminded The Hero is unstoppable. He has always been there for us. He has a thousand faces and his story has been told in a multitude of tongues. He is the personification of the best of us in spite of us. We all need to listen for his song.

We’ve heard that song when astronauts launched into the heavens and walked on the moon. We heard it when men raced into burning towers to save their fellow man and when a girl got shot fighting to educate her sisters. We’ve heard his call watching someone dive into a river to save drowning boy, staring open-mouthed at an athlete scoring an impossible point or when a scientist changes how we look at the world. Sometimes the song is a quiet one – a couple struggling to take care of their children, a person finally learning to forgive and move on.

Far from being a kid’s cartoon, The Hero calls us into the fullness of adulthood. He inspires us to follow his lead – to face our fears, grow up and, most importantly, to be of service to others. He prods us to accept the great dictum of life – that living for others is the only way to truly live.

When I have kids of my own, I know they will put a red towel around their shoulders and pretend to fly around the house. That’s because at bedtime I will have sung to them about a hero who is faster then a speeding bullet, more powerful than a locomotive and can leap tall buildings in a single bound. Of course, when they are older and I am dead they’ll know it was only a story – but a good one. One they can turn to when the going gets tough, when they need inspiration to sing their own song.

I hope my children will always look to the heavens, secretly trying to catch a flash of red and blue thundering through the clouds. I hope they will always believe a man can fly.

Update: February 6, 2017. Now, almost 4 years after I wrote this post, I have my own little superhero. Natalie, may you always believe a man can fly. Up, up and away! Love Dad. 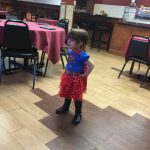 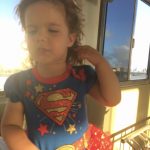